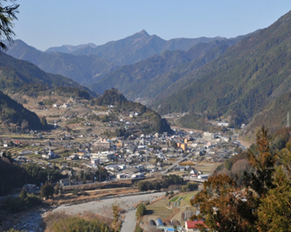 The town of Kamiyama is located at the center of Tokushima prefecture on the island of Shikoku. It has a population of approximately 6200 people. The area of the town is 173.31 square kilometers ( 9th largest of 24 cities in Tokushima). It takes 50 minutes to reach Kamiyama from Tokushima city by car. Kamiyama is surrounded by mountains and follows the Akui river flowing through the center of town. Farms and residential areas are dotted along the river. Eighty-three percent of the town’s area is mountainous with an altitude ranging from 300-1500 meters above sea level. Cypress and Japanese cedar trees make up the majority of the trees in the forests, but other indigenous species and wild Rhododendron grow throughout the western part of town. Kamiichinomiya-Oawa-Jinja shrine is located in the Jinryo area, where it is said that Ogetuhime-no-mikoto is enshrined as deity of grain from the Kojiki (Record of Ancient Matters). According to ancient documents, people have been living around this area for centuries and grew Awa millet and other grains. The area used to be called “Awafu no Sato” (where Awa millet originates) which could be the origin of the word Awa (the previous name of Tokushima).

The Kamiyama Artist in Residence (KAIR) Program is an independent project organized by volunteers who share the desire to develop art and culture in Kamiyama and was established in 1999 to invite and provide artists with the unique opportunity to concentrate on their work in a supportive, communal environment

Amagoi no Taki Waterfalls
(One of “Top 100 Waterfalls of Japan”) 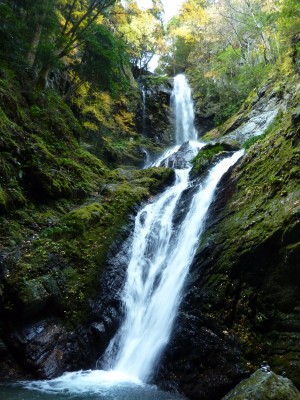 It is commonly listed as one of “the Top 100 most beautiful waterfalls” in the country. Amagoi-no-Taki is the largest waterfall in a series of minor falls along the way. They are broken into two streams, a ‘male’ and a ‘female’ stream, and cascade down over 45 meters to form a small stream below. The scenery of the surrounding nature of Amagoi-no-taki waterfalls is delightful in every season. Hiking from the parking lot, it’s about 800 meters to the falls and the hike consists of a series of quite steep pathways and stairs. However, you will be rewarded with breathtaking views at every step. 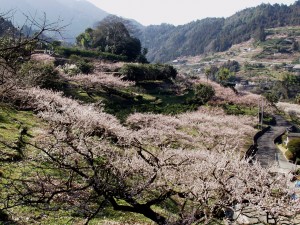 In early spring, Agawa village abounds with Ume blossoms that fill the air with the lovely scent of the Japanese plum. Over 16,000 ume are planted in the area which has a mixture of light pink and white blossoms. The mature fruits are used primarily for plum wines and umeboshi. Each year, an ume festival is held at the end of February that lasts to the end of March. Hiking in the Ume village and other fun events are also held during the festival. 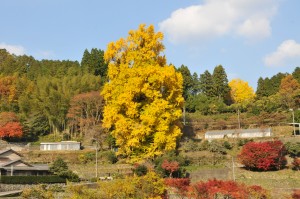 Okubo chichi-icho Ginko tree is in the Okubo village overlooking terraced rice paddies. The tree is 500 years old, 13 meters in circumference, and 38 meters high. Chichi-icho means “milk ginkgo”. It is said that a mother can pray for the healthy growth of her children by tying a prayer cloth onto the aerial roots hanging from branches that resemble breasts. This ensures rich milk for her children’s welfare.

The tree changes colors dramatically throughout the seasons. It is especially beautiful to see the ginkgo tree covered with golden leaves in late fall. The residents illuminate the trees at night with lanterns and a glorious golden color emerges amidst the darkness shrouding the landscape. 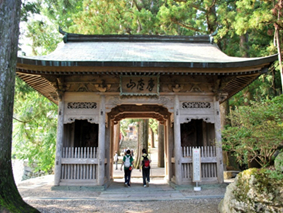 It is located on Shosan-ji mountain (938 meters above sea level) and it is the second highest pilgrimage site of the Shikoku 88 temple pilgrimage. From the number 11 Fujii-ji temple, there is a trail that traverses the steep mountain. It climbs and plummets down a narrow mountain path, called “Henro Korogashi”. A direct translation is “Pilgrim falls down”. Nowadays, there is also a road for automobiles that one can use to reach the temple and makes for a much easier approach. Since the temple is located on the mountain, it is cool and refreshing in summer time. If it is a clear day, you will have a spectacular view all the way to Awaji-shima island and the Shikoku mountains far ahead from the front approach to the temple. There are more than 100 individual 500-year old treasured Japanese cedar trees that are planted along the front approach to the temple. Sanmen Daikokuten (three-headed Daikoku) placed at this temple is a sculpture said to represent Kobo Daishi sculpted praying for a life of comfort and bountiful grain. If you walk further up from the temple, you will discover the innermost sanctuary located on the top of Shosan-ji mountain. It is said that En no Gyoja Odunu built a hermitage to enshrine zao Daigongen in the Taiho years ( 701-704) which marks the origin of this temple.

Another episode from the history of Shosan-ji temple is also related to Kobo Daishi. Once upon a time, Kobo Daishi visited Shosan-ji, he was tired and decided to rest under one of the cedar trees. When he was asleep, Amida (Amitabha Tathagata) appeared in his dream and told him that there was something unusual around the area. When he opened his eyes, the entire mountain was engulfed in flames. He started to walk up to the mountain chanting the Shingon mantra and the fire began to extinguish. When he had nearly summited, a giant snake appeared from the cave and tried to disrupt his chanting. Kokuzo Bosatsu appeared with a light, and with her help, the snake was sealed in the cave. The cave still exists on Shosan-ji mountain and it has rested in peace ever since. 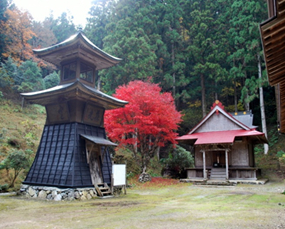 It is located on the Konesan mountain (700 meters above sea level) and is accessed by rugged paths. Originally, it is said there once was a mountain shrine located nearby and that a shrine maiden was consecrated to a god there.

It is told that Senjukannon (the Buddhist Goddess of Mercy with 1000 arms) and Amaterasu omikami (the God of the sun) have been enshrined there since the mid- 8th century AD. Some historians profess that the temple’s founder is the daughter of Minamotono Mitsunaka.

Introduction in Kamiyama-cho by the map.